Leucine is King: How much leucine is needed to maximize protein synthesis for muscle building and recovery? 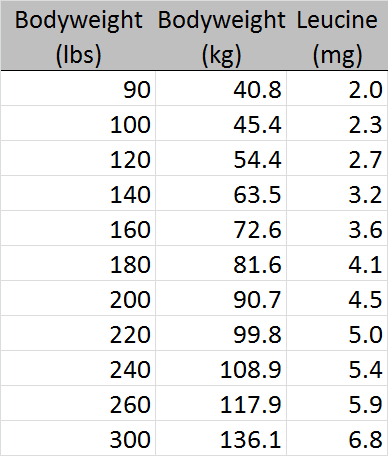 Correction Leucine Content in image is grams not mg

There are suggestions that the current recommended dietary intake of leucine be increased from 14 mg/kg bodyweight/day to a minimum of 45 mg/kg bodyweight/day for sedentary individuals, and more for those participating in intensive training in order to optimise rates of whole body protein synthesis.

For athletes 50mg/kg bodyweight seems to be a good amount. 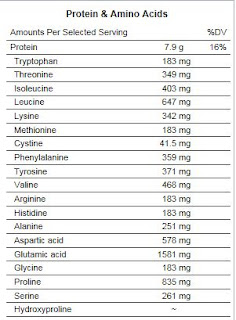 Source:
Milk, whole, 3.25% milkfat Nutrition Facts & Calories
https://nutritiondata.self.com/facts/dairy-and-egg-products/69/2
Nutrition facts and Information for Milk, whole, 3.25% milkfat. ... Nutritional Target Map for Milk, whole, 3.25% milkfat. This feature ... Amounts per 1 cup (244g) ...
Past Posts:Leucine is King (Part 1) For Muscle Building and ... - WHEY2MUSCLELeucine is King. Part 2 This is the Whey. - WHEY2MUSCLE - BloggerLeucine is King: (Part 3) How Do You Get the ... - WHEY2MUSCLELeucine is King (Part 4): Headlines from ergo-log ... - WHEY2MUSCLELeucine is King (Part 5): Leucine metabolites - WHEY2MUSCLELeucine is King (Part 6) - WHEY2MUSCLE - BloggerLeucine is King (Part 7): 3 Protein Super Synthesis Methods
Don't take my word for it. Here are a micro-sampling of the information available on leucine.
From Leucine triggers muscle growth by Jeff S. Volek, Ph.D., R.D. on nutritionexpress.com
Researchers at the University of Illinois conducted studies that examined weight loss diets containing 10 grams of leucine per day and 125 grams total of protein per day with a minimum of 2.5 grams of leucine at each meal. In two separate studies, the groups consuming high leucine diets had greater weight loss, greater fat loss and better preservation of lean body mass. In these studies, the high leucine diets also resulted in better glucose control.
From International Journal of Sports Physiology and Performance; 2011, Vol. 6, No. 1, 38-50After 12 weeks, the placebo group had increased its maximum five-repetition weight resistance ability by 31 percent while the leucine group increased its ability by 41 percent.The leucine group took 8 grams of leucine per day.From  Am J Clin Nutr. 94:809-818.A team of researchers from the United States Army Research Institute of Environmental Medicine, Tufts University and the Louisiana State University System gave eight volunteers 10 grams of a protein drink containing either 1.87 grams or 3.5 grams of leucine during a cycling test. Those who got the drink enriched with 3.5 grams of leucine had a 33 percent increase in muscle synthesis over what the subjects who got 1.87 grams of leucine experienced.From Ironman Magazine Leucine anabolic key to unlocking gains for older athletes.The word anabolism is synonymous with growth. Clearly, essential amino acids are anabolic, but scientists have found that after the age of 50 people become resistant to their effects. Dr. Katsanos and his fellow scientists found that seven grams of essential amino acids stimulated protein synthesis in young people but completely failed to do so in older people. Does that mean that older people have lost the capacity to respond to amino acids? If so, then the muscle loss and the blunted response we see to resistance training are an inevitable consequence of aging. Fortunately, that is not the case. Senior trainees simply need a higher dose of critical elements in an essential-amino mixture.

That implies that masters athletes can respond the way young athletes do, given a higher dose of amino acids.From Leucine: Build Muscle With This Anabolic Amino Acid by Layne Norton on bodybuilding.comLeucine activates a major complex in the anabolic (muscle-building) pathway called mTOR 5-7.For those who are dieting but want to maintain maximum muscle mass, a leucine supplement may help alleviate some of the catabolic effects of a calorie-deficit diet. Leucine is more anabolic than other amino acids. While this hasn't been studied in detail, it might be possible to substitute something like 5g of leucine for 30-40g of dietary protein and still have the same or greater stimulatory effect on muscle protein synthesis.Leucine has a far greater stimulatory effect on protein synthesis than any other amino acid. Protein synthesis increases similarly in response to a relatively small dose of leucine compared to a whole food meal. Also, adding leucine to a protein-rich meal further increases the rate of skeletal muscle protein synthesis.From Unleash the Full Anabolic Potential of Food on T-nation.comJust adding a few grams of Leucine to a meal, high protein or not-so-high protein, increases muscle protein synthesis by 50-70 percent in humans (3)(4) and increases protein turnover by over 500 percent!(5)Apparently, orally administered Leucine stimulates muscle-protein synthesis by itself, independent of the insulin surge you get from a meal. However, it does seem that the role of insulin is permissive in that some rise in insulin is necessary to allow Leucine to do its work. (6)The message is that Leucine is best used with a meal, rather than taken in-between meals by itself.Additionally, adding Leucine to a 100% carbohydrate meal isn't the best idea, either. It seems the effects of Leucine are rate-limited if other amino acids aren't present.(6) That means that Leucine, while anabolic all on its own, won't do its best work unless there are at least some other amino acids present.In short, a protein meal is good, but adding Leucine to it makes it much, much better.Furthermore, it seems the change in Leucine concentration in the blood may be more important than the actual amount of Leucine in the blood, so you don't want to take Leucine non-stop.(1) It's better to take a scoop of it (about 5 grams) with a meal, let blood levels drop, and then take another scoop about 4 hours later.=======================================================================I could keep going but you probably aren't as nerdy as me and want to get back to the gym.The take away is focus on getting 2.5 to 5 grams of leucine with breakfast, pre-workout and post-workout meals. If you are under 40 years of age shoot for 7.5 grams per day and over 40 shoot for 15 grams per day.Peace!
Discoveries that have been made over the last decade show that the mTOR pathway is activated during various cellular processes (e.g. tumor formation and angiogenesis, insulin resistance, adipogenesis and T-lymphocyte activation) and is deregulated in human diseases such as cancer and type 2 diabetes.

mTOR signaling at a glance | Journal of Cell Science

Hence, when 10 grams of essential amino acids are ingested muscle protein synthesis and components of the mTOR signalling pathway are activated when measured 3 hours following ingestion [31]. Ingestion of an amino acid mixture with extra leucine has also gained attention due to the potency of leucine.

Leucine-Enriched Nutrients and the Regulation of mTOR Signalling ...