On Your Newstand: Musclemag A-Z Nutrition For Mass Building 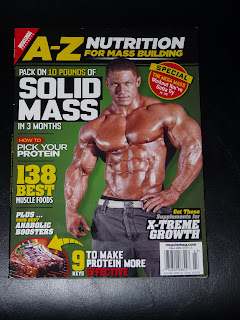 I stopped at Walmart on my way home from work to get some almonds, milk, Greek yogurt and the Avengers DVD. Hulk is the man! And to my delight on the magazine rack I found the Musclemag A-Z Nutrition for Mass Building (Fall 2012).


If you are serious enough about building muscle to actually apply some professional tips, then this is a must have.


It contains a breakdown of carbohydrate, fat and protein requirements by bodyweight and body type. The best times to consume various protein sources.  An expansive creatine guide. Workouts, nutrition and a guide to boosting testosterone.


All of this information only cost me $7.


Did I say this is a must have? 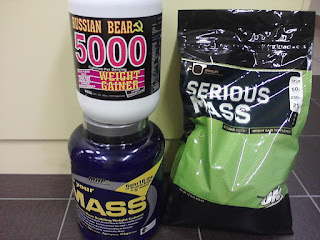 Are you hardgainer? Do you eat as many cheeseburgers and ice cream sandwiches as you want and still gain no weight?

Well, you should do two things.

As far as the workout goes, maybe you should do a Stronglifts 5x5 style workout (but only once or twice per week) and sit and play video games and sip Russian Bear 5000 all day.

Russian Bear 5000 is 2,600 calories per serving and provides 184 grams of protein and 391 grams of carbohydrates and 46 grams of medium chain triglycerides (MCT).

I wouldn't advise trying to drink the entire 5 scoop serving in one sitting but to break it up. I would start with one scoop per day and still focus on whole foods.

Vitol is an interesting company. Most of their products seem to be stuck in the eighties using ingredients like glandulars. Try them out if you are brave enough.

Other mass gainers worth trying.


The below information is from the product page for Russian Bear on www.bodybuilding.com.

Why Protein and Creatine Helps You Put Size On. Here's the Whey. 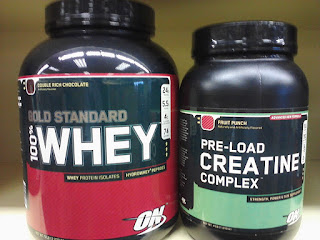 These are the two staples for anyone looking to put on some serious muscle mass. Hands down the top two. I don't care what anyone says about test boosters, growth hormone seratogues or any other supplement.

The only other things you need are weights, rest and diet, diet, diet.

Get your bodybuilding stack at Piping Rock Supplements!

Why Protein? Why Whey?

You have to be in a anabolic state to build muscle. Once you've stressed the muscle sufficiently through progressive weight training, you have to rebuild the muscle. And whey has the highest biological value of any protein source. Whey also has the highest leucine content. See my posts "Leucine is King" for more on this amino acid.

Whey digests fast. Within two hours it's digested and then the bloodstream is filled with leucine. This kicks off what's called the mTOR pathway. That is the Mammalian Target of Rapamycin mechanism which signals the body to increase protein synthesis. Protein synthesis means MORE MUSCLE.

It seems that the perfect amount is 20 grams unless you've just worked out then 40 grams seems to really take muscle building into overdrive.

While any protein source post-workout will bring results, we are only interested in the most effective means and that means whey.

Study after study and bro science aficionados all agree that creatine helps you build slabs of muscle. While I love whey....if I could only buy one supplement...it would be creatine. It's inexpensive and provides the biggest bang for the buck.

Creatine is made from the three aminos arginine, glycine, and methionine. It works on new lifters as well as seasoned lifters.

You get the energy for explosive energy from a chemical known as adenosine triphosphate (ATP). Creatine helps the body regenerate ATP allowing you to keep pushing up weight. This is simplified but I'm no doctor. Just some dude with a blog.

Creatine supplementation also helps pull fluid into the muscle which expands the muscle and gives it its fullness. 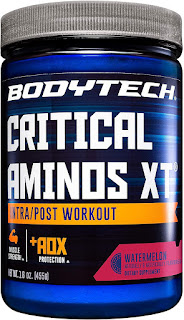 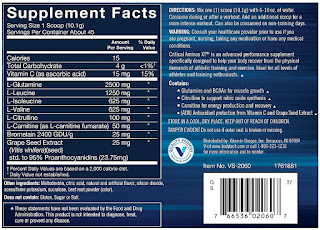 This is a great product. I have been mixing it with and Optimum Nutrition Gold Standard 100% Whey as part of my pre-workout. I have also been drinking it standalone after my morning cardio. Mixes great and tastes great. I take it pre-workout because of the energy and nitric-oxide support via the vitamin C, citrulline and grape seed extract.

L-citrulline is the precursor to l-arginine which leads to nitric oxide production.

The bromelain fights post-workout inflammation and the carnitine helps with both cortisol lowering, fat burning and increasing androgen receptors.

You could drink this all day if so inclined. I have been adding scoops of BodyTech Critical Aminos XT to my pre-workout along with Jet Alert caffeine and L-theanine.


You likely saw this pic of Mercy crying when her mother died of Ebola. Here's an update http://t.co/cavpaN0HB8? pic.twitter.com/Dt0DQRg3Zk
— Anna Almendrala (@annaalmendrala) March 25, 2015 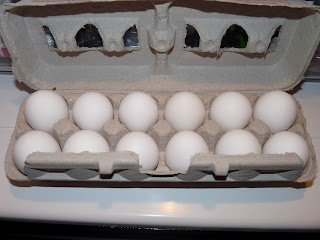 Sometimes you should listen to the old schoolers. Men started eating egg whites and testosterone plummeted.

Well, it appears people are listening. I meet hardgainers all the time who hate eggs. These guys want to just chug weight gainers and do barbell curls.

According to Tim Ferriss in his book the 4-Hour Body, if you want terrific sex you need to eat 4 whole eggs before bedtime 20 - 24 hours before the big event in order to get 800 mg of testosterone maximizing cholesterol.

Texas A&M (College Station) did a 12 week study and found that subjects who ate three whole eggs per day while weight training almost doubled their muscle mass gains and more than doubled their strength gains. This was compared to study participants who ate no more than one egg per day.

In the past, when protein supplements were either rare or terrible tasting, eggs were a staple in the bodybuilding diet.

Eggs are inexpensive and portable when boiled or pickled.

Eat up and get huge! 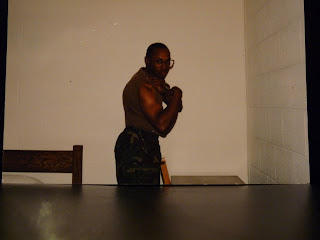 Back in the day. I wore big glasses and eat plenty of eggs. 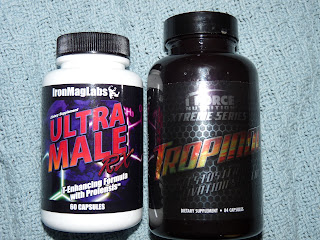 That's the claim. It's right on the box. Of course the study was on rats. So if you are a rat it's almost guaranteed that you can be the biggest rat on the block. What's that.....do I hear the Smashing Pumpkins?

Well, I think the product is definitely worth a try. It a pretty simple formulation. Oh yeah, apparently more is not better with bulbine natalensis. It can actually lower testosterone if you do not follow directions.

Basella Alba (25:1)
Used by herbal healers in Cameroon as a libido booster.

I love the Vitaminshoppe's buy one get one half off month. It's a time where I try stuff that I felt maybe good but are too pricey to normally get.

Last time I tried the 400 mg version of SAMe. Good stuff. Gave me a relaxed, mellow feeling. I was hoping it would do more for my shoulder pain.

Here's some things you might want to try. To see specifics on the ingredients goto www.thevitaminshoppe.com. 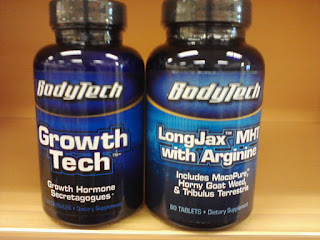 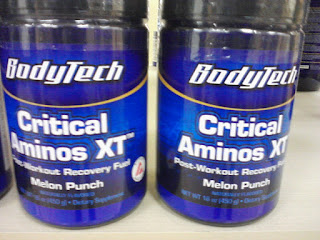 Great anytime not but especially during and post-workout. 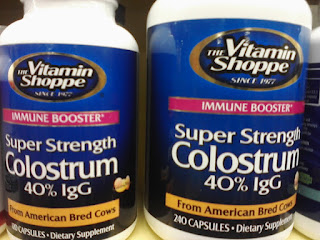 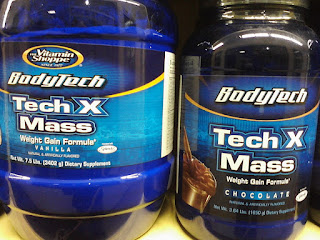 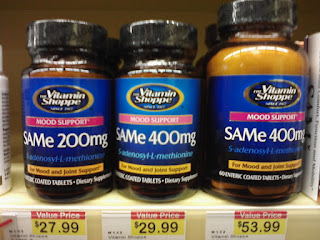 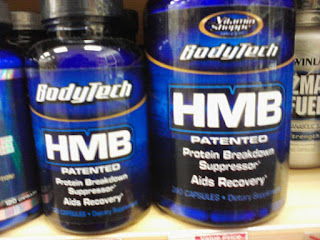 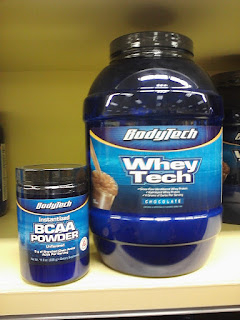 Perfect hardgainer combo. I would recommend over weight gainers. 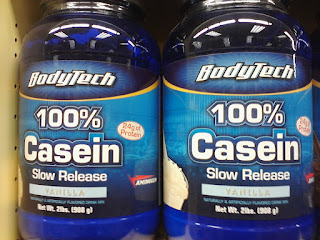 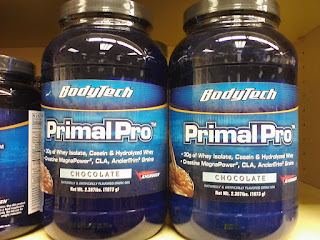 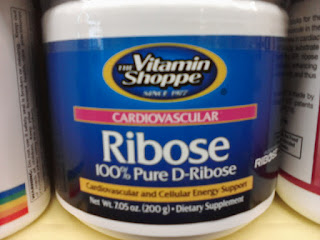 Ribose is great for those lacking the energy to get through their workouts. 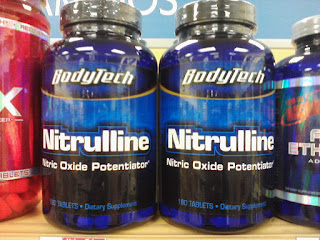 My favorite nitric oxide (NO) booster. Contains 3 grams of Arginine Alpha-Ketoglutarate(A-AKG) and 1 gram of Citrulline-Malate per serving. 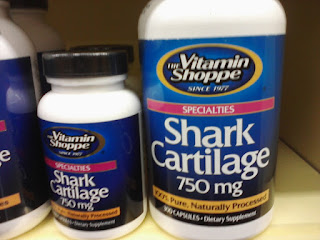 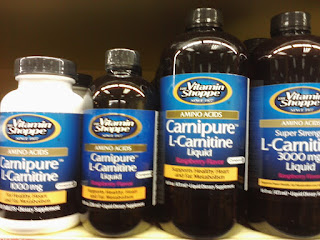 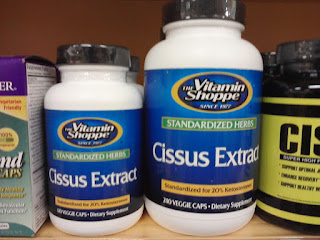 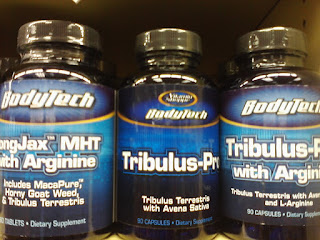 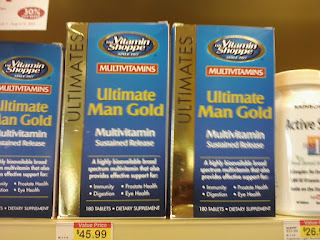 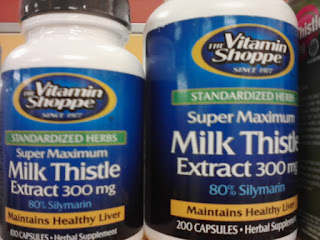 Email ThisBlogThis!Share to TwitterShare to FacebookShare to Pinterest
Labels: Supplements

Be the Boss of the Gym with Your Gymboss Interval Timer. Tabata Time.

I had to find a way to workout efficiently. Sometimes moving from bench press to lat pulldowns without rest inbetween.  Weights for 15 to 20 minutes then treadmill until time to get ready for work.

Well, my best tool to keep me moving has been my Gymboss Interval Timer. Inexpensive and invaluable. Rugged and accurate.

I bought two. One I use for straight timed events (rest periods) the other I use for Tabata training.

Tabata training involves doing 20 seconds of work followed by 10 seconds of rest for a total of 8 rounds.

An example would be a 20-second sprints and 10 seconds of rest repeated 8 times for a total of 4 minutes. 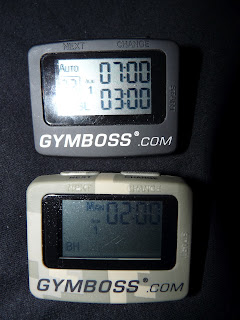 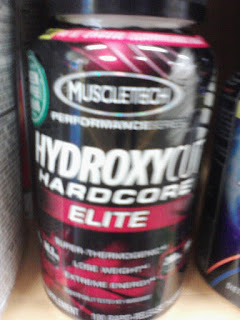 Has Muscletech done it again? Is this the industries new best fatburner? Maybe....only time will tell.

I have not tried it yet but will. It has the combination of stuff that could make it the best. A synergistic combination of ingredients that should speed you on your way to rip city.

Let's break it down.


Frees up fat and boosts your metabolism to burn that freed fat.


Activates the enzyme adenylate cyclase that allows fat cells to be broken down and used as fuel. Forskolin also increases testosterone production at the source.


Contains chlorogenic acid which has been shown in several clinical studies to lead to significant fat loss. It works with caffeine to do this while also lowering the impact of post meal blood sugars.


Yohimbine and rauwolscine bind to fat cells removing limits to the amount of fat burned.