Product Review: Is MuscleMeds NO Bull a bunch of bull? The only pre-workout with real nitric oxide.

Update: MuscleMeds NO IS NO LONGER AVAILABLE. I WOULD RECOMMEND ONE OF THE PRODUCTS BELOW.

Update: MuscleMeds NO BullReview | Take it only if you want an extreme muscle pump and a crazy veinylook! 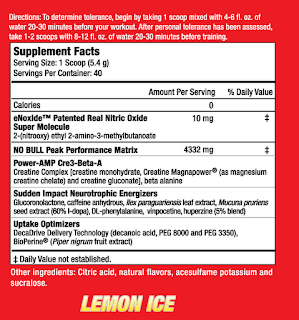 Here's what MuscleMeds has to say:

THE ONLY PRE-WORKOUT WITH REAL NITRIC OXIDE

Get your bodybuilding stack at Piping Rock Supplements!

After reading the studies that I could find, I would be skeptical but would in the interest of "bro science" still try the product.  Why because the studies have not always panned out when it comes to my own personal experience with products.

If I used this, I would give it a shot alone on arm and chest days and would then stack it to see what works best.

My stack options would be with one of these products.

The below studies have a mixed bag of good/bad information you read and then make up your own mind. When I finally try NO Bull, I will try it alone and then stack it.

Introduction
Nitric oxide (NO) acts as a secondary messenger signaling cellular processes, promotes vasodilation via smooth muscle relaxation, and inhibits platelet aggregation and adhesion. Supplements claiming to increase NO have been promoted in the athletic and bodybuilding populations increase muscle hypertrophy via increasing blood flow and nutrient delivery to muscles, thus resulting in improved performance and recovery. To date, however, no evidence has been reported to support this.
Recently, a new molecule has been released into the market with claims that it will deliver NO to the blood stream and muscle instantly via sublingual delivery, and therefore increase performance. The molecule is 2-[nitrooxy]ethyl 2-amino -3-methylbutanoate, and can be found in the dietary supplement ENoxide by Muscle Meds (ENO).

To test the claims made by the manufacturer of ENO, Bloomer et al. (2010) studied the effects of acute ENO supplementation on blood nitrate/nitrite and hemodynamic variables of heart rate (HR) and blood pressure (BP). Nitrate/nitrite have been shown to be elevated by sublingual consumption of nitroglycerine, a drug used to elevate blood NO in order to reduce BP. It is important to first test the efficacy of ENO before performing exercise tests. If ENO does indeed increase nitrate/nitrite, then exercise tests are warranted. However, if it has a low efficacy, then exercise testing would be unnecessary as increased NO is the suggested mechanism of action.

Methods
10 resistance trained subjects were recruited, mean age 26, all performing at least 5 hr of resistance exercise per week for a mean of 8 years. All subjects were non-smokers and were not currently taking any dietary supplements. Subjects were required to keep a 24 hr dietary log and consume the same foods prior to each session.

Subjects were administered either the placebo (a capsule) or the treatment (a tablet) following a 10 hr over night fast. Blood was sampled prior to administration, and at 5, 15, 30, and 60 min following administration and tested for nitrate/nitrite. HR and BP were taken at the same times on the opposite arm. The study was conducted in a single blind manner, as the researchers did not have a suitable sublingual tablet to use as a placebo. The subjects, however, had no knowledge of which was placebo and which was treatment.

Discussion
ENO had a small effect on circulating nitrate/nitrite and no effect on hemodynamic variables at rest. Due to the lack of efficacy at increasing NO precursors, it is unlikely that ENO would lead to an improvement in performance. While there was a 5-6% increase in nitrate/nitrate at 15 min, this value dropped below baseline at 30 and 60 min. Thus, the effect of ENO on NO is short lived. Future research is needed to determine if there is an interaction between exercise and ENO on circulating nitrate/nitrite.

There were several limitations of this study. First, it was conducted in a single-blind manner, and although technicians and researchers did not have an opportunity to influence subjects plasma nitrate/nitrite or hemodynamic, nor were subjects given any knowledge of whether tablet or capsule was treatment or placebo, a double blind design would have been ideal. Should further research be carried out, a sublingual placebo should be used.

Conclusion
The market for dietary NO supplements has increased significantly in the past decade. Manufacturers promote these supplements to increase blood flow to muscles, thus improving nutrient delivery and waste removal and resulting in improved performance and recovery. To date, however, with the exception of one compound, there is no research that shows any of the supplements increase nitrate/nitrite or enhance performance. The one exception is glycine propionyl-l-carnitine (GPC). GPC has been to increase nitrate/nitrite levels in both sedentary and resistance trained men; however, there is no research that shows a direct relationship between increased nitrate/nitrite circulation and performance. Thus, athletes are encouraged to consult certified/educated sports nutritionist professionals and/or strength and conditioning professionals, as well as perform their own research before purchasing a dietary supplement.


Abstract:
Bloomer, RJ, Alleman Jr, RJ, Cantrell, GS, Farney, TM, and Schilling, BK. Effects of 2-nitrooxy ethyl 2-amino 3-methylbutanoate gel on resistance exercise performance and blood nitrate/nitrite in resistance trained men. J Strength Cond Res 26(6): 1680-1687, 2012-Nitric oxide dietary supplements are popular within the sport community. Our recent work involving the oral intake of 2-nitrooxy ethyl 2-amino 3-methylbutanoate demonstrated an approximately 6.7% increase in circulating nitrate/nitrite. However, no measures of exercise performance were obtained. The present study used a topical form of this molecule to determine the impact on exercise performance and blood nitrate/nitrite. Fourteen resistance trained men (24 [+ or -] 1 years old) reported to the laboratory on 2 occasions to undergo exercise testing, which consisted of arm curl isometric force and muscular endurance (3 sets to fatigue using 80, 65, and 50% of 1 repetition maximum [1RM]: total of 9 sets). The gel (2-nitrooxy ethyl 2-amino 3-methylbutanoate; mixed in tea tree oil) or placebo (tea tree oil) was applied topically by the subjects for 7 days before each test day, with 7-10 days separating the randomly ordered conditions. Blood samples, arm circumference, and perceived "muscle pump" were taken before and immediately after exercise on both test days. The heart rate and perceived exertion were measured after each set. No statistically significant differences were noted between conditions for performance variables (p > 0.05). However, when using a load of 50% of 1RM, 6.2% more repetitions were performed when using the gel as compared with when using the placebo; 19.9% more repetitions were performed by 8 subjects noted to be "responders" to gel treatment. Blood lactate and muscle pump significantly increased with exercise (p < 0.0001) but were not different between conditions (p > 0.05). Minimal change was noted in nitrate/nitrite, and the heart rate and perceived exertion were nearly identical between conditions (p > 0.05). These findings indicate that 2-nitrooxy ethyl 2-amino 3-methylbutanoate gel has a modest (6.2%), nonstatistically significant effect on exercise performance, in particular when using a load of 50% 1 RM--with greater benefit noted in selected individuals. Studies inclusive of a larger sample size are needed to extend these initial findings.
KEY WORDS ergogenic aid, bloodflow, nitric oxide

My final thoughts would be to check the internet for board posts and to read the reviews on Bodybuilding.com. I'm for try it and see if it works for you. We've all tried stuff that the studies said were the "holy grail" and found that they didn't work.