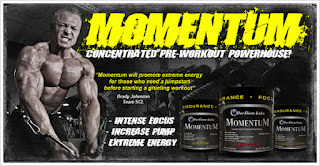 Whether you train in the early morning or after a long day of work there's one thing we all need to maximize our results, and that's motivation. StarChem Labs has found the solution with our latest breakthrough pre workout formula, MOMENTUM.* Bring out your Extreme Intensity, Focus, and Energy to help to become your personal best.*

Citrulline Malate
Citrulline Malate is a great choice when looking to improve athletic performance and recovery.* Citrulline's power lies in its ability to aid the body in removing fatigue causing toxins, such as lactic acid and ammonia.* This can assist for you to not only train harder but will promote improved endurance as well.*

Arginine
Arginine is another amino acid which can help the body remove ammonia.* Arginine cannot be made in the body so it must be consumed though foods or supplements. Arginine is also known for being a precursor to nitric oxide which will relax blood vessels and increase vasodilation.*

Advantra Z®
Advantra Z® in an extract of Citrus Aurantium and is standardized for 60% synephrine. It is known for promoting thermogenesis, increasing energy levels and improving athletic performance.*

Caffeine
Caffeine is a central nervous system stimulant which will promote alertness and energy.* It is well known especially in the supplement industry, common in almost all pre workout products for its ability to increase athletic performance.*

Taurine
Taurine generally is known as the second most abundant amino acid in muscle tissue. One reason Taurine benefits performance to such a degree is has the ability to act similar to Creatine in which it expands muscle cells allowing for more water to be held inside.* Cell volume is an important as it can aid in hydration helping increase protein synthesis and muscle fullness.

L-Tyrosine
L-Tyrosine is a precursor to several key adrenal hormones, norepinephrine and epinephrine, as well as dopamine, a neurotransmitter.* By increasing dopamine, L-Tyrosine may increase focus and mental alertness and offset fatigue during exercise which makes a great tool in a pre workout product.*

L-PhenylalanineL-Phenylalanine is another amino acid which can increase levels of dopamine.* When used in combination with Tyrosine it usually will have a pronounced effect on mood and alertness supporting increased focus during your training session.*

N-Acetyl-L-Tyrosine
N-Acetyl-L-Tyrosine is another form of L-Tyrosine which is more bioavailable and better absorbed.* Therefore this will also help decrease the negative effect of stress and increase dopamine levels and cognitive performance.*

Huperzine A
Huperzine A comes from a Chinese moss Huperzia Serrata. It is know for its effects on learning, memory, and focus.* It works by supporting acetylcholine, one of the body's main neurotransmitters responsible for memory.* This should increase focus and concentration levels during your workout.* 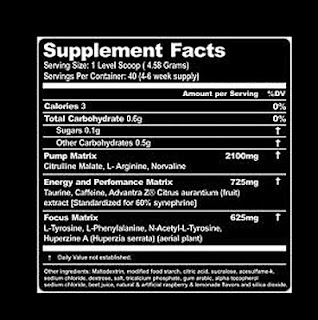