What kind of results can you expect from using Provosyn?
When Provosyn™ is consumed daily in conjunction with a program of regular, progressive resistance exercise, users can expect impressive and highly satisfying results like those described below:
After 1 week:
• Alleviation of muscle soreness and aches normally caused by workouts
• Quicker recovery from workouts
• Enhanced energy and mental performance (e.g. less brain fog)
• Enhanced muscle pumps during workouts
Week 2 and beyond:
• Progressive loss of body fat or weight (when Provosyn is used in conjunction with a calorie-reduced diet)
• Increases in muscle size, hardness and definition
• Provosyn users may experience a heightened sense of power inside and outside the gym 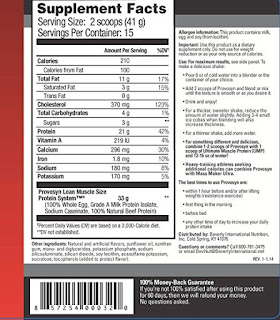 What makes Provosyn so unique?
1.Provosyn contains a 2:1 ratio whole egg to milk protein, plus beef. This ratio is based on the recipes used by famed nutritionists of the 1950s to help their elite clients build lean muscle without gaining fat.
2.Provosyn contains 21 grams of complete protein. This is more than enough protein to stimulate muscle protein synthesis, the essential element of building muscle.
3.Just like the Old School method proven over decades of use, Provosyn combines liberal amounts of lipids (including 11 grams of fat) with small amounts (4 grams) of carbohydrate. This combination helps maximize fat-burning.
4.Provosyn contains intermediate-speed proteins from:
• 100% Whole Egg: The egg protein in Provosyn comes from whole eggs that have been carefully spray-dried and pasteurized.
• Grade A Milk Protein: The milk protein in Provosyn is obtained from fresh pasteurized milk using a low-heat system. This helps ensure that the proteins remain undenatured and retain their muscle-building potency. Also, the milk protein in Provosyn is low in lactose and contains casein and whey in the same unaltered ratio found naturally in milk.
• 100% Natural Beef: The beef protein in Provosyn is 98% protein by weight. Produced under USDA inspection, it contains no MSG, salt, carriers, or other added ingredients.
5.Provosyn contains more than 9,000 mg of essential amino acids (EAAs) including over 4,000 mg of the branched-chain amino acids (BCAAs) leucine, isoleucine and valine per serving.
6.Provosyn can be used to make delicious, guilt-free shakes, smoothies, brownies, puddings, cookies and muffins, or as a topping on hot and cold cereals. Recipes at BeverlyInternational.com.

Who is Provosyn ideal for?
• Individuals 40 years and older seeking to minimize age-associated loss of muscle size and strength (sarcopenia) and maximize muscle gains from workouts.
• High school, collegiate and professional athletes seeking to add muscular weight.
• Physique competitors of all kinds: bodybuilders, figure, fitness and bikini competitors (pre-contest as well as off season)
• Dieters seeking to preserve or build muscle while losing body fat.
Which Beverly International products can Provosyn be combined with?
For maximum results, combine Provosyn with:
• Multiple Enzyme Complex
• Ultra 40 100% Argentine Beef Liver tablets
A common Old School practice was to take digestive enzymes and liver tablets with or between meals to further enhance lean muscle size and development. Clients of Rheo Blair were often instructed to do this. He felt that everyone, including young people, needs extra help in digesting a concentrated source of protein like Provosyn.
According to Blair, some of his clients insisted that they doubled their gains by taking digestive enzymes in addition to protein shakes. Others, including Blair himself, were able to tolerate certain proteins in their diet when using digestive enzymes, whereas before they could not.
Provosyn can also be combined with Mass Maker or UMP to enrich and enhance the taste and nutrient profile of your shake.


This “Old School” protein combining strategy is guaranteed to put you on the fast track to lean muscle size!


What worked “back then” still works now for:
If you’ve been training for 20 years or longer, then you probably know people who achieved one or more of the above by eating a diet including whole eggs, milk and beef. In fact, this powerful protein combining strategy dates back well over half a century:
What made the “Old School” approach so effective?
The body of scientific knowledge about nutritional biochemistry has grown tremendously since the 1950s. However, human biology hasn’t changed a bit. Thus, what worked back then still works now. What made the “Old School” approach so effective? Three factors were critical:
Egg and Milk: More than the sum of their parts
Let’s talk in more detail specifically about the combination of egg and milk, since this is so important.
The two main proteins in milk are casein and whey. Casein is described as “sustained-release” because it releases amino acids into the bloodstream more slowly. Whey, on the other hand, releases amino acids more quickly and is therefore said to be a “fast” protein. Scientists have determined this by separating casein and whey from milk and studying them in isolation. Their research also suggests that these proteins may work best when they are left together, just as they occur naturally in milk.


This may explain why some of today’s protein supplements don’t work as expected.
Many if not most of today’s protein supplements are based on whey. Many also contain little or no fat or cholesterol, and no whole egg protein. Perhaps not coincidentally, many consumers complain that these products barely help them maintain muscle, let alone build it.
Whey is clearly a high-quality protein. Clinical studies show that it does a good job of stimulating muscle protein synthesis, the essential element of building muscle. This is partly due to its high speed of absorption. However, the high speed of absorption also means that whey is “fast in, fast out”. In other words, its effects are relatively short-lived. This may be why the combination of “fast” whey and “sustained-release” casein found naturally in milk works better: Whey gets the muscle-building “engines” started and casein helps keep them going.
Now let’s move on to egg. Despite all the hype about milk protein in recent years, scientific studies dating back to the 1930s show that egg protein –again, we’re talking about protein from the whole egg, not just the white- is equivalent to milk protein. Some researchers even suggested that egg was superior (see Sumner et al., 1938, and Sumner and Murlin, 1938, for instance).


Lipids are not “bad”
Like milk, the egg is definitely more than the sum of its parts. The yolk provides just over 40% of the protein in an egg. It also contains a host of other nutrients that are either absent, or present at considerably lower levels, in the white. Among these are lipids.
The term lipid refers to a group of nutrients that includes fats, cholesterol, and phospholipids, among other compounds. All three are found in eggs. Over 90% of the lipids in an egg reside in the yolk.
Fat serves important functions in the building of muscle cells. The building blocks of fat are fatty acids. Fatty acids also occur in phospholipids, which are used to build the membrane around the muscle cell. Whole eggs, because of the yolk, are rich in phospholipids. Phospholipids also aid in the digestion of fats and are essential for proper brain function.
It’s well known that whole eggs –again, because of the yolk- contain plenty of cholesterol. Like fatty acids and phospholipids, cholesterol is used to build muscle cells. It is also a precursor to androgens, including testosterone. The biggest source of cholesterol in the diet is eggs.


Eggs in the prevention of age-associated muscle loss
In 2007, researchers at Texas A&M University decided to investigate the relationship between dietary cholesterol and the muscle-building effect of resistance exercise in older men and women (Riechman et al., 2007). They were interested in getting insights into how to treat or prevent sarcopenia, or age-associated loss of muscle size and strength.
The researchers observed a dose-response relationship between dietary cholesterol and gains in lean mass (i.e. muscle). In fact, cholesterol intake was found to be the biggest predictor of how much muscle the subjects gained from their workouts. Strength gains, too, were greater with a higher cholesterol intake. Subjects who consumed 7.2-10.2 mg of cholesterol per kg of lean body mass were more than twice as strong as those who consumed 2.2 to 3.5 mg per kg of lean body mass.


These pieces of scientific evidence and others may explain why the “Old School” strategy of combining whole egg and milk proteins is so effective for increasing lean muscle size without gaining fat!