From Ergo-Log:
Strength athletes who lower their intake of energy lose more fat mass when they supplement with 2.5 grams of betaine daily. American researchers from Coastal Carolina University discovered this in a study in which two dozen female students participated as test subjects. 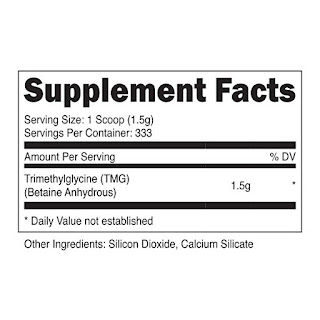 
The Half-Life of betaine from examine.com

There appears to be a very long elimination half-life with betaine, in accordance with its high bodily retention.

Urinary elimination of trimethylglycine (TMG) supplementation tends to be in the form of dimethylglycine (DMG), which is the methylation byproduct of trimethylglycine. Overall urinary excretion appears to be low as it has been measured at around 4% of oral intake (50mg/kg).[23] In the dosage range of 1,000-6,000mg in otherwise healthy persons when measured over the next 24 hours the urine accounts for 3.2-7.4% of orally ingested betaine (and excreted in the form of betaine, which increased with dose as DMG excretion was fairly stable).[22]

Both betaine and DMG are found in the urine, and DMG excretion rates do not seem to be responsive to changes in dietary supplementation (perhaps due to a limit on methylation), whereas betaine elimination goes up linearly with supplementation. It seems urinary excretion consists of a small amount of overall excretion when measured acutely, perhaps due to high bodily retention or fecal elimination.


From Suppversity:
2-3g of Betaine Per Day Double Your IGF-1 & Reduce Your Body Fat-% By 19%!? Plus: Spermine Gets Fat Rodents Lean in 4 Weeks + 29 Common(!) High Spermine Foods.
➲ IMPORTANT REMINDER - This is "betaine" as in trimethylglycine aka TMG, not "betaine" as in betaine HCL, which may help you if you have serious problems with your digestive system, but is otherwise (i.e. for 99% of the healthy population) a complete waste of money and will have NO effect whatsoever on your IGF-1 and body fat levels.