How Testosterone is Produced.


Testosterone production in the testicles and its manly effects on the body are regulated by a complex system.

Gonadotropin-releasing hormone (GnRH) is released from the hypothalamus in the brain and travels to the pituitary gland, where it stimulates the release of luteinizing hormone (LH).

The pituitary gland releases LH. LH enters the bloodstream and travels to the Leydig cells in the testicles, where it stimulates the production of testosterone.

Leydig cells in the testicles produce testosterone from cholesterol. Testosterone is released into the blood vessels and travels to the muscles to increase muscle mass and to other sites to influence masculinization and other effects.

LH inhibits GnRH release from the hypothalamus, so does testosterone and estrogen on a negative feedback loop. This ultimately leads to lower testosterone production by the testicles.

Testosterone also can be converted to estrogen by the aromatase enzyme. Estrogen then can cause gynecomastia (development of breast tissue in males) and an increase in bodyfat.
Source:
T-TIME. Andrich, Vince. Joe Weider's Muscle & Fitness; Feb 2004, Vol. 65 Issue 2, p104, 6p 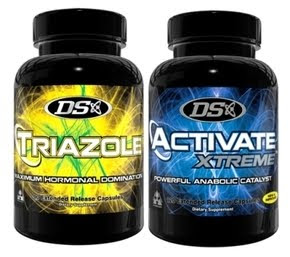