I love this stuff! It works great for me. You can take it stand alone or combine it with a stim based pre-workout like iForce Maximize or DS Craze. 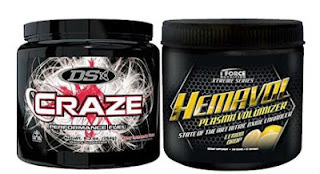 Get the Craze Hemavol Stack Here

This product is so powerful iForce recommends that you only take it on workout days and no more than 4 times per week.

Here are the ingredient highlights.

Agmatine Sulfate
Is a naturally occurring compound that is the decarboxylation product of the amino acid arginine. Agmatine sulfate improves both nutrient transport and nutrient partitioning (meaning more calories are pumped into the muscle tissues and NOT stored as fats). Agmatine sulfate also aids in promoting a healthier blood flow.

Agmatine sulfate has even been found to significantly increase the production of certain hypothalamic and pituitary hormones that boosts testosterone levels.

Agmatine has also shown to have an antioxidant effect on the body helping to rid the body of damaging free-radical build ups.
.

Citrulline Malate
The Latin word citrullus which literally means watermelon and that's where the amino acid that naturally occurs in the intestine gets it's name. Citrulline or L-citrulline is a chemical agent that balances nitrogen and detoxifies ammonia.

Citrulline when bonded to malic acid becomes citrulline malate. According to Flex magazine, "citrulline malate elevates muscle ATP by 35% during exercise and increases the rate of creatine phosphate resynthesis by 20%. " Allowing you to workout longer and harder with a bigger muscle pump.

Glycerol Monostearate
According to Flex magazine, "Glycerol also known as glycerine, glycerol has strong osmotic properties, meaning it attracts and binds large amounts of fluids, which can help prevent dehydration and improve body temperature control when exercising in the heat. This same property enhances pumps by driving more fluid into muscles, especially when taken in conjunction with creatine."

Norvaline
According to the Flex Encyclopedia of Supplements, "Norvaline is a derivative of the branched-chain amino acid (BCAA) valine. Research has shown that this modified amino acid can boost NO levels by more than 50%. In addition, norvaline also indirectly raises growth hormone (GH) levels in the body, for greater gains in muscle mass and strength. Taking norvaline with arginine or citrulline (which is converted into arginine in the body) provides a synergistic effect that raises NO levels."

Rutacaerpine
Also known as Evodia, Rutaecarpine (Rut) has been shown to induce hypotension and vasorelaxation.  According to Webmd, "Evodia is a tree that is native to China and Korea. Evodia fruit, which has a strong bitter taste, is commonly used in Traditional Chinese Medicine. The fruit and root bark are also used as medicine in other herbal practice."


iFORCE Nutrition has done it again! Introducing the world's first plasma volumizer, HEMAVOL! Hemavol was specifically engineered to support muscle pumps and myofibrallar plasma volumization.* With Hemavol's revolutionary hemodynamic technology, your workouts will NEVER be the same! A new generation of plasma volumizers has emerged and Hemavol is the ONLY choice for those who are sick of inferior so called "Nitric Oxide" products packed with useless sugars, caffeine and Arginine. Hemavol uses only ingredients backed by science. It's time to get one step ahead of the competition, it's time for Hemavol!

Hemavol is a Combination of 2 Critical Matrices that work synergistically to promote plasma volumization:

Hemodynamix matrix: scientifically formulated and precisely dosed to promote the actions of the Nitric Oxide Synthase (NOS) Enzyme, while at the same time supporting the plasma concentration of key compounds that are critical to the production of N.O.* By augmenting the NOS Enzyme and maximizing the concentration of amino acids needed to produce N.O., the Hemodynamix matrix helps intracellular plasma, glycogen, and water to enter muscle cells, creating a cell volumizing pump unlike anything you have ever experienced.*

By supplementing your diet with Hemavol, you are unlocking newfound gains in size, strength and endurance.* Enter a new world of vasodilation, skin splitting muscle pumps, and myotropic cellular expansion!*

With your first dose of HemaVol, you will notice a volumization or swelling of your muscle cells. Using completely unique and advanced compounds, HemaVol helps reduce water from under your skin and helps move it into your muscle cells.* This supports bigger pumps, increases in strength, and insane endurance!* This rapid expansion promotes intense pumps that last longer!*

By augmenting the Nitric Oxide Synthase (NOS) Enzyme, you can support the body’s production of Nitric Oxide.* The synergistic ingredients in Hemavol help your body to promote NO production as well as reducing the traditional negative feedback loop that prevents super-human pumps + NO levels.* In addition to a huge pump, you will promote vascularity when you work out using HemaVol.*

Increasing the blood flow to muscles is important for one reason, forcing more nutrients, and more oxygen and water into the muscle cell. Due to HemaVol's intense vasodilation effects, it supports your veins in delivering all the necessary nutrients your hungry muscles need.* Get the most out of every single calorie you eat, and make sure it gets to where it needs to go!

With your first dose, Hemavol's Hemodynamic Technology boosts the body's ability to eliminate toxins such as Lactic Acid. Lactic Acid is most commonly referred to as "the burn" during a workout. By supporting the removal of this nasty toxin, Hemavol will enable you to experience strength + endurance gains.*

Hemavol contains no synthetic stimulants. That means there is less chance of crash or jitters, and you can stack it with other products like Maximize for the perfect blend of pump, power, focus, and energy!*

Increased Effects with Each Dose*

The revolutionary plasma volumization system in Hemavol was scientifically formulated to increase its effects over the first few doses!* As your body adapts to the power of Hemavol, each dose will help you get one step closer to the lean muscular physique you train so hard to achieve!*
Posted by wheyblog at 7:54 PM