Combine one scoop of the main formula and four level scoops (8g) of citrulline malate in 12-16 ounces of  water and mix. Consume Totalis 30-45 minutes prior to weight training for optimal performance benefits.

Caffeine
is a stimulant that has been demonstrated to increase anaerobic performance
and decrease perceived exertion during exercise.

NAT
is the acetylated form of the amino acid L-tyrosine, a stimulant-like
non-stimulant ingredient which acts downstream of caffeine to increase its
effects without increasing stimulant-related side effects. The acetylation
process greatly increases the per-gram efficacy of this
ingredient.

ALCAR
is a nootropic (sometimes known as a ‘smart drug’) that has been demonstrated
to cross the blood-brain barrier and act on the brain as a strong antioxidant,
thus slowing the degradation of brain cells. It is included here alongside
caffeine and NAT with the goal of increasing cognitive function. ALCAR also
has the desirable side effects of improving insulin sensitivity and sperm
motility.

LCLT
is a combination of carnitine and tartrate that has been demonstrated to
decrease free radical formation, improve recovery, increase androgen receptor
density, and improve one’s VO2 max.

Citrulline
malate is a combination of the amino acid citrulline and malic acid
demonstrated to improve muscular endurance and decrease delayed-onset muscle
soreness after exercise. 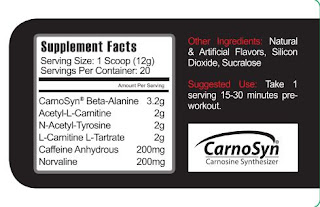