SuppVersity - Nutrition and Exercise Science for Everyone: Lose 11% Body Fat in 8 Weeks W/Out Dieting Efforts...: There are 1bn ways to prepare your eggs and the Internet is a rich source of recipes. You will probably remember the SuppVersity news ab...


Bottom line: The study at hand stands in line with previous "egg studies" (read them), which highlight that eggs are a nutrient-dense, health-promoting superfood and not the bad "cholesterol bombs" as which they are still portrayed by both, the mainstream media, and "nutrition experts" who haven't upgraded their cookie-cutter approach to nutrition since the 1970s.

In spite of the previously mentioned evidence of the health benefits of eggs, I would like to remind you that other low-carb compatible high protein foods could have yielded similar effects.

It's also worth to note that, in line with previous studies, the effects of the egg diet cannot be ascribed to "any particular metabolic advantage [of low carb dieting] for body fat loss" (Hall 2017), but may be attributed to the ability of 'low carbing' to "decrease hunger, reduce appetite and promote satiety" (Hall 2017; Noakes 2017) - nevertheless, we cannot exclude that other foods with a similarly 50%/50% ratio of protein to fat and an "eggscellent" complete EAA profile could have worked just as well... at least until a follow-up study explicitly compares eggs to other low-carb foods show the opposite. 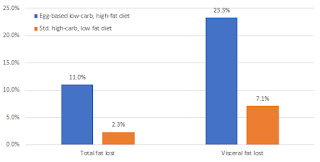 Hall, K. D. "A review of the carbohydrate–insulin model of obesity." European Journal of Clinical Nutrition (2017).