Product Review: Muscletech Neurocore. Do Yourself a Favor and Get You Some!

I love this stuff. Good taste, energy and pump. I take the full 3 scoops. My intensity is great. I didn't think they could improve on the DMAA formula but Muscletech did it.

Here's the details of the new formula:

L-Citrulline
This amino acid is converted to arginine in the body. Taking citrulline increases arginine and NO levels better than taking arginine by itself. It staves off muscle fatigue by aiding in the removal of ammonia from the body and reabsorbing lactate for increased ATP resynthesis.

Caffeine Anhydrous
No pre-workout would be complete without this stimulant and effective fat burner. Additionally, caffeine boosts strength and power output when taken before workouts.

L-Theanine
Theanine has been shown in clinical research to work synergesticly with caffeine to boost brain function.

Deanol Bitartrate (DMAE)
DMAE inhibits the breakdown of choline, which should lead to higher acetylcholine levels and, thus, better mental function and focus during workouts. 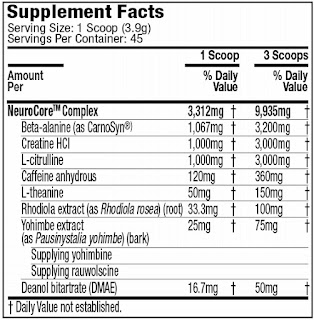