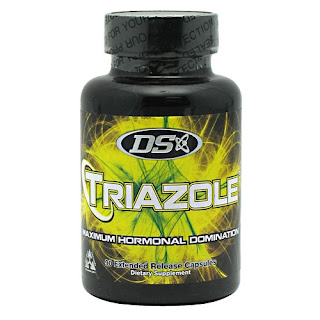 Get Triazole at Tiger Fitness!

Maximum Hormonal Domination*
You WANT SIZE, you WANT STRENGTH and you WANT IT NOW! But your body has other ideas.
Sound familiar?
Thought so. Your body has several hormones it releases that govern muscle mass, with the king being the hormone that makes a man a man: Testosterone. On a daily basis the body only releases a certain amount of testosterone, which creates a problem for those wanting to get as big and strong as possible in the shortest amount of time. This is controlled by what is called the Hypothalamic-Pituitary-Testicular Axis (HPTA). Now it's time to level the playing field, because thanks to Triazole® your HPTA met its match!*
Triazole® represents a REVOLUTION for the sports nutrition industry. Never before has Driven Sports released an estrogen support product so powerful*. The Triazole® formula is based on a powerful, all natural estrogen modulator that simultaneously acts to promote healthy liver function and provides anti-oxidant support to the whole body!* Expect MAXIMUM HORMONAL DOMINATION!*

Is it time to really kick your training UP A GEAR and gain some REAL SIZE?
Only SERIOUSLY HARDCORE trainers need apply.
If you're still reading then let us first congratulate you because those that take their training SERIOUSLY are the kind of people we like. Let us also let you in on a little secret that will help you take your training to the NEXT LEVEL.
Triazole® has been researched, developed and thoroughly tested by DS for two years in order to create the perfect product for size and strength support.* Triazole® is the HPTA equalizer and here's why it can make a significant difference for your physique.
Estrogen is evil, right?
Wrong. And anyone who tells you otherwise doesn't know what they are talking about. Estrogen has SEVERAL beneficial effects for bodybuilders when it comes to packing on size but a balance has to be established. Too much estrogen and you open yourself up to estrogenic-related side effects including the DREADED "GYNO". Too little and you can hinder gains and even stop your sex drive dead in its tracks. This is where many previous estrogen-controlling products went wrong – some completely annihilated estrogen, and others opposed the actions of testosterone in the brain leaving users with a libido so low they felt like they had been castrated. Not good.
But still, estrogen remains a problem for many men who display signs of high estrogen. So we decided to not only address this situation, but use it to our advantage – killing two birds with one stone if you will. We did this by tackling estrogen from two distinct pathways – its conversion from testosterone via the aromatase enzyme and its effect directly at the receptor.

Triazole® the Estrogenic Equalizer!
Aromatase is the enzyme that converts androgens like testosterone into estrogens and is the main way that males generate estrogen.

In case you didn't know, this is a GOOD THING. Actually, it's a GREAT thing as one of the functions of testosterone is to rapidly increase protein synthesis in cells, which helps to promote BIGGER and STRONGER muscles.
But that's not all.
Triazole® also introduces CAPE, an all-natural SERM (selective estrogen receptor modulator) found in bee propolis extract. Propolis is a resin that bees use for structural support of their hive, but recent research has shown it to have numerous health benefits.* These include strengthening healthy immune system function and being excellent for heart health.* While propolis contains many constituents, it is only CAPE that has been clinically suggested to help DISPLACE estrogen from the estrogen receptor.* If CAPE is occupying the estrogen receptor, then the estrogen hormone has no way to bind to it itself making CAPE a novel SERM!* In addition, CAPE has also been suggested to help promote a downregulation in estrogen receptor expression, or in other words, reduce the amount of estrogen receptors!*
The "heal-all" herb
Prunella Vulgaris is a highly esteemed traditional herb that is affectionately known as "heal-all". Prunella Vulgaris has been suggested to have anti-estrogenic support properties through its effect in activating the Aryl hydrocarbon receptor ( AHR) which can interfere with estrogen.* Further support of this effect is displayed in its effect on inhibiting the estrogen-induced enzyme, CYR61.*
When combined Triazole® exemplifies what we call Multiple Pathway Technology™ and if we left it there, Triazole® would still be amongst the first of its kind to attack estrogen from three angles.* But that's not how we do it here at DS. We don't just want great. We want to excel beyond greatness in order to give you the best chance at fighting off your genetic limitations.
So we didn't stop there.
Curcumin is the main compound found in the Curcuma longa plant. It is no secret in traditional Indian Ayurveda where it has been a staple for over three thousand years. Clinical research has finally caught up to it and studies suggesting the benefits of curcumin have been released at an alarming rate in the past decade.
Curcumin also works SYNERGISTICALLY with CAPE to provide support against oxidative stress – something that can lead to altered cellular integrity and negatively impact your ability to recover. They do this by inducing a protein called Heme Oxygenase-1 (HO-1). Prunella Vulgaris also induces this protein, giving you another TRIFECTA for anti-oxidant supporting effects!*

And a little something for "performance"…
Lepidium meyenii, or maca as it is more commonly known, is a plant typically found in South America. Considered an adaptogen, maca is believed to help support healthy immune system function. Ancient warriors of the Inca tribe used to take maca prior to battles as they believed it gave them fierce strength.* Folklore states that the effect on their libido was so great that once they were on the verge of capturing a city they were prohibited from taking it in order to protect the women of the city! More recently it has been suggested to be an ergogenic aid during exercise, supporting improved markers of endurance.* Maybe the Incan's were onto something.
Even the most experienced users of maca will be impressed that Triazole® uses the 20:1 extract, which we're confident almost no one will have used before. The 20:1 extract is one of the highest quality material available.
Testosterone support is further facilitated through the inclusion of zinc aspartate.* Zinc is an important mineral required for optimal serum testosterone levels and Aspartate works as a secondary messenger in the body, supporting the production of testosterone by the testes.
Triazole® also comes with added Bioperine®, a standardized extract from the fruit of Piper nigrum L (black pepper). Bioperine® is clinically suggested to enhance the oral bioavailability of certain co-ingested compounds.* This may help support the effectiveness of the Triazole® formula.* In fact, Bioperine® may increase the effectiveness of curcumin alone, as surmised in one study looking into bioavailability, by 2000%!
How well does it work?
Glad you asked. We have conducted an in-house pilot study of eight participants, gathering actual blood work to show you just how effective Triazole® is for providing support to help reduce estrogen and promote a boost in testosterone.* Users involved took Triazole® as recommended for a cycle and followed their usual training and nutritional regimens with no other dietary supplements.
One of our testers had a 120% increase in TOTAL testosterone and a 257% increase in FREE testosterone! On average, tester's free testosterone jumped 146% and estrogen decreased 45% which is perfect for controlling estrogen without annihilating it and getting side effects. We think you'll agree that Triazole® is the most advanced estrogen modulator available.

Triazole® will work for you ALL DAY LONG!
Seriously. Our Extended Release Technology™ means that Triazole® will be having all of these awesome effects while you're working, resting or taking the gym by STORM!
When we say Maximum Hormonal Domination, we really aren't kidding. You told us that you wanted SIZE, you wanted STRENGTH and that you wanted it NOW.*
That time has come.
Bioperine® is a registered trademark of the Sabinsa Corporation.
Triazole®, LetroDex®, pZole®, and Tetrafene® are registered trademarks of Driven Sports, Inc. All rights reserved.
*These statements have not been evaluated by the Food and Drug Administration. This product is not intended to diagnose, treat, cure, or prevent any disease.

Aggressive Strength Natural Testosterone Booster
Posted by wheyblog at 9:05 AM