I like the idea of one product hitting nitric oxide in multiple paths and this product does that.

In my post The Path to the Pump I discussed the two below paths available.

Hybrid N.O. uses citrulline and agmatine for Path 1 and GlycoCarn for Path 2. Effectively taking all roads to the pump. 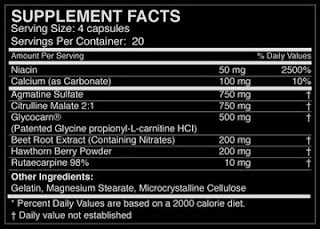 Agmatine:
Agmatine inhibits nitric oxide synthase, which prevents the toxic effects associated with NO synthesis. Part of this is the release of peptide hormones that play an important role during the cell proliferation process. Agmatine also supports better vasodilation. In fact, it has been suggested to contain numerous systemic vasodilatory effects. In addition, agmatine is a powerful antioxidant. Further benefits include increased glomerular filtration rate and insulin release from the pancreas, along with modulation of gastric function.

GlycoCarn:
Known as glycine propionyl-L-carnitine, GlyoCarn is not only a glucogenic amino acid but is also crucial in the formation of creatine. The strong vasodilatory effects of NO have recently been suggested to increase nitric oxide production, as well as support increased peak power while reducing lactic acid buildup.

Hawthorn Berry:
Hawthorn Berry is an extract that has been around for centuries—it´s one of the oldest natural wellness herbal plants used in Europe. Hawthorn benefits the circulatory system, promoting healthy flow of blood throughout the body. This is a benefit athletes especially can appreciate.

Beet Root:
A vegetable abundant in nitrates, Beet Root´s dietary nitrate is reduced to bioactive nitrite NO2. It is then reduced further to nitric oxide as it is consumed. The result is increased plasma NO2. Dietary Beet Root supplementation may also help reduce muscle ATP turnover rate when you are under a heavy workload. Beet Root demonstrates potential to enhance exercise tolerance during lengthy endurance sessions.
These statements have not been evaluated by the Food and Drug Administration. This product is not intended to diagnose, treat, cure or prevent any disease.
Posted by wheyblog at 9:27 AM