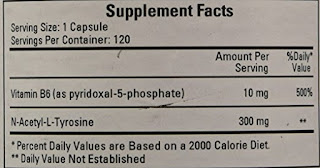 WHAT DOES IT DO?


L- Tyrosine is an amino acid which is the precursor (the substance from which it is made) for brain neurotransmitters such as L-Dopa, dopamine, norepinephrine , epinephrine (adrenalin,) and Phenylethylamine (PEA.)

This version is more easily absorbed and more bioavailable than regular L- Tyrosine similiar to the acetylated version of other amino acids such as cysteine and carnitine. It can therefore be used at a lower dose. Biopterin further enhances its bioavailability.


None at normal doses.


Take one or two capsules daily or as directed by a physician.