Aromatase is an enzyme which converts testosterone to estrogen. Inhibiting aromatase increases testosterone and reduces estrogen, promoting muscle growth and fat loss. Numerous studies have seem to have confirmed this.

In this post I will look at a few of the current means of estrogen management. Often referred to as SERMs or Selective Estrogen Receptor Modulators.

Before with get to the current popular ingredients, let's talk about lifestyle things you can do. These are especially important if you belong to the "big belly club" like me.

Now to the individual supplements.

In healthy young men, it cuts "bad" estrogens in half by helping the liver neutralize them. DIM doesn't actually reduce estrogens. What is does is help the liver convert them into weaker forms.

Calcium D-glucarate attaches itself to estrogens in your intestines and passes them out into your toilet bowl. Otherwise, your body's could reabsorb a significant out of estrogens your body intends to eliminate. The only possible downside is that it also helps remove excess testosterone and cortisol, but only the overspill that's already destined for elimination. Take 800-600 mg as 2-8 divided doses.

University of Mississippi (Oxford) researchers discovered that damiana leaf extract inhibits the aromatase enzyme that converts testosterone into estrogen in the body. Take 50-500 milligrams three times per day between meals.

5, 7-dihydroxyflavone or chrysin is a flavonoid compound found in many plants and in honey. It has been known for years to inhibit the aromatase enzyme and block the conversion of testosterone into estrogen. Recent research from Texas Tech University (Lubbock) finds that it can also directly increase testosterone production. Take 1 gram of chrysin with breakfast, lunch and dinner.


Is an anti-estrogen supplement. It lowers estrogen promoting higher testosterone levels. It also has been found to enhance protein synthesis and lower cortisol levels. Take 500-2,000mg per day in three divided doses with meals


A closely related derivative diindolylmethane (DIM), naturally occurring phytochemicals also reduces the strength of estrogens by converting them to weaker varieties in the liver.


The new entry's (most are natural ingredients that bind to estrogen receptors):


Known as the ingredient from the French paradox, resveratrol is a SERM type product that has many other health promoting benefits. Resveratrol has been shown in studies to not only block estrogen but and increase LH leading to higher testosterone levels.


This is typically an extract of raspberries and pomegranate. It has been studied to block estrogen.


This is the soy paradox. We typically say don't take soy. Daidzein which is a metabolite of soy that has weak estrogenic activity.


Many studies have shown Grape Seed Extract to be a good aromatase inhibitor.


URSOLIC ACID
This poly phenol found in the skin of apples has been shown to increase muscle growth and strength by increasing production of IGF-1 and reducing the amount of testosterone that gets converted to estrogen. It has also been shown to increase fat loss while simultaneously building more muscle. Take 250-l,500mg 30-60 minutes before workouts.


Doses equivalent to about 500 mg for humans, easily reachable with lpriflavone supplements. Studies have found that serum testosterone levels increased, estrogen levels decreased, and muscle RNA went up 5%-10% (meaning more muscle protein was being directed) due to aromatase inhibition.


Ori Hofmekler (The Warrior Diet) lists this as having anti-aromatase agent. I will have to do further research.


Carthamus tinctorius (Compositae) as an anti-estrogenic. Studies have shown that tracheloside significantly decreased the activity of alkaline phosphatase (AP), an estrogen-inducible marker enzyme. As such CLA has also been pro ported to have anti-estrogenic capabilities.


Chaste tree or Vitex agnus castus contains the active compounds known as agnosides that work to reduce estrogen levels and boost luteinizing hormone (LH) levels. In males, this can lead to a dramatic increase in testosterone. Take 200-400 mg of vitex agnus castus or chasteberry extract immediately before bed. Take it in 6-8-week cycles, then lay off for about four weeks before starting the next cycle.


Hesperetin is created by metabolising hesperidin in the stomach which is found in citrus fruits, especially orange. Naringenin is another citrus bioflavonoid whose metabolites are able to lower aromatase enzyme and estrogen. They do this by attaching to receptor sites.


Has been shown to be effective in the fight against xenoestrogens.


Has been shown to be a natural aromatase inhibitor.


Has promise as an aromatase inhibitor by occupying estrogen receptors.

Contest Drawing: Enter to Win BPI Sports A50 and A-HD Stack. Get a headstart on your mass stack. 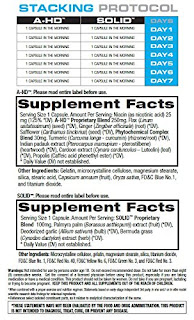