They've done it again! This ingredient list is unmatched in the pre-workout area. 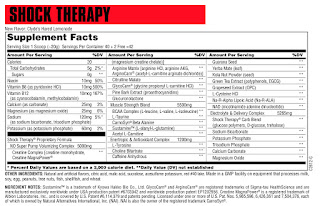 
Why did we change Shock Therapy?
The old Shock Therapy was a venerable pre-workout that was launched several years ago. Then, as now, it was a full-feature, comprehensive pre-workout pump and energy product. However, today, we believed we could make the product better in every aspect, from the formula to the flavor. Flavoring systems, and our ability to produce great-tasting products, have improved tremendously in those years. We wanted to bring to bear these new technologies into an all-new and completely revamped formula for die-hard lifters.


How is this different from the old version of Shock Therapy?
This is an all-new, overhauled formula and completely redesigned flavoring system. This is not a simple facelift or update. Newer cutting-edge and patented ingredients were added to make this a more powerful and complete pre-workout product. What you'll notice immediately, as you take the new Shock Therapy, is the amazing new flavors. Unlike other pre-workouts on the market, this new formula is delicious–something that you can sip slowly and savor.


What makes Shock Therapy different from other pre-workouts?
Shock Therapy is a complete and comprehensive all-in-one. There is no need to buy a separate creatine, BCAA, "pump", energy/drive, antioxidant, performance and endurance supplement.* They are all provided for in Shock Therapy in a scientifically suggested and delicious package.


Does Shock Therapy have a full daily dose of creatine?
Yes. When you take Shock Therapy, you do not need additional creatine that day.


What is the difference between Shock Therapy and Animal Pump or Animal Rage?
Animal Pump is a strict pump product with mild stims. Animal Rage is a concentrated pre-workout for promoting intense energy and focus.* Animal Rage does not contain creatine or "pump" ingredients, while Shock Therapy does. Think of Animal Rage as a PR in a can, great for max effort workouts and or powerlifting meets. Shock Therapy is better suited for general lifters and bodybuilders who value the pump and maximizing muscle size and shape. Essentially, stacking Animal Pump and Rage would be comparable overall to Shock Therapy.


How much caffeine is in Shock Therapy?
Shock Therapy contains caffeine anhydrous and other natural sources of caffeine. Each scoop is the equivalent of roughly two strong cups of coffee. For two scoops, twice that amount.


Should I take one or two scoops of Shock Therapy?
This is a highly individualized question based on various factors such as bodyweight, personal stimulant tolerance, experience, etc. We recommend one scoop for those that are under 200 lb. and two scoops for those over 200 lb. (or if you have a high stimulant tolerance). As always, initially start with a lower dose to assess your own personal tolerance. If you have never used a pre-workout before, you may even need to start with ½ scoop.

Pre-workouts are usually nasty. Is it the same with Shock Therapy?
Absolutely not. We went to great lengths to ensure that the taste would rival the benefits, and spent many months just working on the flavors. Taste is, without a doubt, a strong point with the new Shock Therapy. Whether you choose Clyde's Hard Lemonade, Hawaiian Pump, or Grape Ape, we are sure you won't be disappointed.


What other products stack well with Shock Therapy?
Shock Therapy stacks well with Storm and Torrent. For example, take Shock Therapy pre-workout and follow it up with Torrent post-workout. And while Shock Therapy is loaded with BCAAs, for those who want more BCAAs during the workout, you can sip on Atomic 7, no problems. On off days, you can use Storm to get your daily dose of creatine and other nutrients.

THE MYSTICAL, MYTHICAL "PUMP"
For old school champions and modern day warriors, this is the holy grail. The product of a complex series of processes, it's physical and it's also psychological. But you don't need a Ph.D. You don't need to know how it works. You just need to feel it - feel the blood engorge your muscles and make you bigger. Literally. So how does the new Shock Therapy do in the pump department? Read for yourself.


"Pumps and flavor were the two things that blew me away. I actually had to hide it from my roommate as he told me he got the best pump ever and that the stuff tasted awesome.* The energy was solid, and not to the point of jittery. Amazing product across the board." - Josh Halladay, NPC Bodybuilder


"Seriously... it's ridiculous. I trained back and biceps. I am always carbed up and very well hydrated when I train. My skin was splitting 3 sets in. I hit wide chins, pullovers, lat pulldowns, low rows, and DB rows for back. My lats were completely blown out. No possible way I could have pumped another drop of blood into them. Vascularity was unreal before I even touched my biceps.* I was seeing veins that I hadn't saw since I was 30 lb. lighter, including a massive pipeline that crossed my delt, ran down my bicep and continued to my wrist.* I am very impressed with this product." - Chase Browning


"I got an incredible pump from this product. My legs felt swollen and I also passed out due to the ridiculous amount of blood flow in my quads and hams. The veins in my arms began to show and it felt great.*" - bigkahuna08


"Shock Therapy is a complete pre workout. The old one provided energy, focus and pumps. This new formula is the same way but improved in every aspect. When it comes to a standalone pre workout (not taking a pump product) this has been the best pump I have ever experienced. I felt like I stacked a pump product with a pre. I had an awesome mind + body connection and the pump lasted a long while.* 10/10." - J_Dieter


ENERGY & DRIVE
One hits you all over like a ton of bricks - the other, a laser-like pinpoint. Together, they make up the next big component of the all-new Shock Therapy. If the pump is the main entrée, then the energy and drive are surely the appetizers. These two will set the table for an amazing session the first time, every time. When your body is sagging, when your motivation is flagging, chug it all away with tall cold one. With Shock Therapy, you get smooth, clean and sustained energy with less chance of crash.* You promote incredible drive and focus without the fogginess.* Here's what lifters had to say:


"The energy strikes quickly, so you better be ready to work out immediately upon consumption.* The new version of Shock Therapy provides a steady stream of energy, which tapers off so slowly that you'll hardly notice the diminishing effects.*" - BetterThanLife


"OMG, after 20 minutes I was so far in the zone that I was ignoring my friends anytime they tried to talk to me. This batch of ST helped bring me into the mindset that allowed me to look at the weight, think about the movement and then do it, nothing else.* After the workouts that I used this, my friends could only describe me as going "Kai Face", which is when you ignore everything, talk to yourself about the weight and hit PRs." - MMAFreak46


"THIS is where this product is quite insane... it is a CLEAN energy, I want to emphasize that. It doesn't make you feel all doped out and doesn't necessarily give you some crazy "laser focus" that makes you feel like you are on drugs.* It just helps me want to lift.* It makes my body feel like I just had a shot of endorphins or something. I was so amped to get to the gym after drinking this (it literally hit me in less than 10 minutes, probably because of fast metabolism) that once I got into the gym, I was running right up the stairs, not walking, like a normal human being would do, lol.* The energy was also constant, throughout which is awesome and though my muscles WERE getting fatigued (as I could tell from my strength levels on the weights), but I KEPT wanting to lift!* This effect is awesome, but I literally had to force myself to stop, so I didn't overtrain TOO much ;) So, Energy, I LOVE it! & job well done!: 10/10" - T3RMINATÖR


SAVOR THE FLAVOR
Going into it, we knew all the tangibles. We knew we had to blow the doors off the old Shock Therapy in terms of pumps, energy and drive. We believe we have succeeded without too much effort at all. But the intangibles - those are harder to pin down. What are the intangibles? The things we all truly appreciate but aren't really willing to admit publicly: flavor. For the long haul, how easily something goes down matters a great deal. After all, no one wants to take a mallet to your palate. As Shock Therapy is chock full of goodies, it's not a quick, slam it back kind of shot. We're talking about a beverage you can savor from the first sip to the last drop. That's how good Shock Therapy truly is. Listen to what the folks had to say about this all too important attribute:


"I have had a lot of pre workout drinks over my years of training, and lately they are just getting more and more chalked out with artificial sweeteners. These flavors...are not like that. I am a huge fan when I can drink a pre workout drink and feel I could drink it on a regular basis because THAT is how good it tastes! I give this flavor [Clyde's Hard Lemonade] a perfect 10/10 because this is how this flavoring is supposed to taste." - little rambo


"Let me start by saying this stuff [Clyde's Hard Lemonade] tasted ridiculously amazing. The taste was so fresh and smooth. It was just as good as the real thing." - BigMike44


"The flavor [Grape Ape] is outstanding. Generally speaking, pre-workouts hardly ever taste good, but we all bang them back with hopes to achieve the advertised end result. This flavor tastes exactly like one of the Atomic 7 flavors. I can honestly say that all three flavors are THE BEST tasting pre-workouts I've ever had." - ToSo


"I had [Grape Ape] it definitely hit the nail on the head on the flavor. It's something I would enjoy to drink every day." - Dietze2


FINAL REPORT
Great results with flavors that speak for themselves. That's the all-new Shock Therapy. Listen to what everyone is saying - great pumps, energy and great flavors.* It may be the perfect preworkout supplement:


"With all these elements combined, this new Shock Therapy is an outstanding and complete pre-workout product. The energy is intense but the focus helps me stay in control while also having great pumps.* I'm not looking to go back to my old pre-workout. Once again Universal has proved they can continue to supply outstanding products and that they truly care about their consumers." - VTanimal


"Some people prefer a product like Animal Rage that helps support sheer, boundless energy and focus.* Some would rather have an amazing pump, a clear head, and the perfect amount of stimulants to get through a tough training session without feeling the desire run through a brick wall. The taste was great. I dunno what R&D has stumbled upon, but the rest of industry is light years away in the taste department. This stuff can't be touched." - Chase Browning


"The future is truly upon us, so go ahead and have high expectations. The new Shock Therapy is about to revolutionize pre-workout products and it won't let you down." - BetterThanLife


There you have it folks. The all-new Shock Therapy. It's ready to make its mark in gyms across the country and around the world.
Posted by wheyblog at 8:20 PM